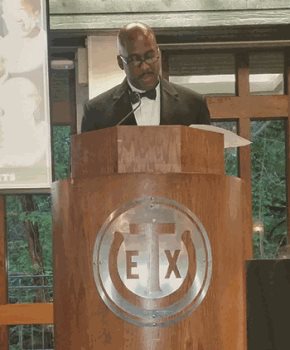 On Thursday, May 19, Junior Mortgage Banker Shelton Green emceed the 2016 Evening of Honors: The Precursors, as we Saw It panel – Symbols of an Ivory Tower: Past & Present. The event honored the first entering class of African American students to The University of Texas at Austin and served as the culmination of the 30th anniversary of The Herman Sweatt Symposium in Civil Rights, an annual event in recognition of Herman Marion Sweatt, the first African American student to attend UT Austin.

"It was truly one of the biggest honors I have ever had in my entire life to play such a small role in such a huge part of history," said Green. "To be in the presence of and rub shoulders with pioneers of any kind is always encouraging and always inspiring."

The ceremony was held at the Etter-Harbin UT Alumni Center in Austin, Texas and featured nearly 30 students in attendance from the UT Austin's first class of African Americans.

Green joined Colonial in June of 2015 after more than 20 years as a broadcast journalist where he was voted the 2013 "Best Man on the Street" by the Austin Chronicle.